The art of the cover crop in South African vineyards

It is that time of the year again when Eco-friendly vineyards, still dormant and devoid of leaves, showcase an explosion of plants and a patchwork of beautiful colours. Conscious wine farmers have strategically sown a number of cover crops for bio-diversity purposes.

We have asked a few of our South African wines estates (Newton Johnson, David & Nadia, Cape Rock and Keermont) to share some of their pictures and secrets with us. 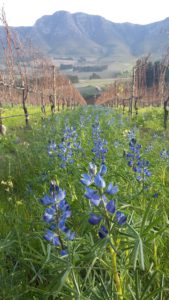 “We plant different winter crops for specific reasons in each block and change the crops from year to year to increase biodiversity and add organic matter to the soil” says Dean Leppan, Newton Johnson’s vineyard manager. Although not certified as organic, the Newton Johnsons wines are farmed according to organic principles, shared Gordon Newton Johnson, Newton Johnson’s wine maker.

“We normally use a mix of Rye, Oats, Lupins, Pink Seradella and some other annual crops to fix nitrogen, aerate soil, build up soil nutrients and suppress weed growth so that we do not have to spray herbicides in between rows” explained Gavin Brand from Cape Rock. In Newton Johnson’s vineyards Dean says “This year we used broad beans in less vigorous blocks to fix Nitrogen from the atmosphere and make it available for the vines. To further increase biodiversity we planted every second row in these blocks with a mixture of Black Oats, Peas and Daikon Radish. The peas also fix Nitrogen, once the oats dry out naturally they will be rolled flat to suppress weeds in summer and the Daikon grow big tap roots to break up any compaction in the soil”.

The crops are not only there to enrich the soil, but also to act a natural pesticide. Newton Johnson uses flowering crops to act as home for the beneficial insects that they release. Keermont uses Mustard seeds as they are a natural fumigant against nematodes. 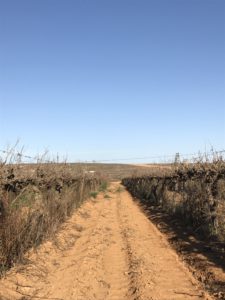 Cape Rock vineyards, not enough rain this year to germinate their cover crops

This year Cape Rock’s cover crops were slow to grow and sometimes even non-existent because of the lack of rain. In the Swartland, Nadia from David & Nadia shared her thoughts“Cover crops did okay with the rain that we received. Our cover crops preserve moisture in soil as rain will not runoff due to the covered surfaces. Straw packed on the bankies also to amongst other things, preserve moisture in soil”. 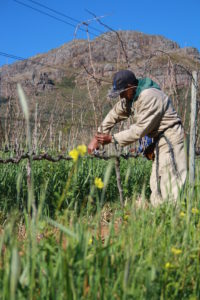 While there is a flurry of plant activity in between the rows, each wine estate is also busy in the vineyards tending to the pruning of their vines.