On Monday the 3rd of April we had the pleasure of hosting a Châteauneuf-du-Pape tasting at Marble Restaurant in Rosebank.  This was a unique chance to compare and contrast new and old, traditional and modern, and the various terroirs in the region.

The tasting began with two white Châteauneufs: the Domaine de la Roquète 2015 and the Clos de Papes 2005. The idea was to try the difference between a young and an old white Châteauneuf, but in fact the two wines were stylistically like chalk and cheese. The former was made in a modern, fruit driven style, suitable for early drinking with a touch of trademark waxiness. The 2005, on the other hand, showed more like a red wine; opening up slowly in the glass with firm tannins and an oily texture. In hindsight, this should have been opened much earlier and served at room temperature to get the most out of it as the last sip was markedly more expressive than the first. This was a wine released from the Domaine ready to drink, but actually seemed to have a longer life ahead of it, another ten years at least. The next flight was three reds from 2014, one from Le Crau, one from Courthezon and a single vineyard Gigondas as a contrast.

First up was the Vieux Télégraphe (Le Crau), which was surprisingly austere and haughty – more akin to a young burgundy in colour and palate than a voluptuous Châteauneuf, but delicious nonetheless.

Second came the Le Clos de Caillou ‘la Réserve’ 2014 (Courthezon). This estate has an interesting history itself, with a number of its vineyards lying within the appellation of Châteauneuf-du-Pape, but being classified as Côtes-du-Rhône due to an ‘administrative disagreement’ in the 1930s (involving a shotgun and an angry farmer). It lies next-door to the esteemed Château Beaucastel in Courthezon and the wine was a complete contrast to the former. More inky, richly textured and showing notes of liquorice and black fruits – this was a bigger beast altogether.

Thirdly was the Hominis Fides from Chateau de Saint Cosme. Gigondas lies a few kilometers North-East of Châteauneuf-du-Pape, high on a plateau and its reputation has long suffered from the comparison with its more prestigious cousin. While never lacking concentration, the wines can sometimes be low in finesse, but this is certainly not the case for the best wines in the region, which in this case stood up very well next to its contemporaries; showing power but also precision and complexity with the potential to age for over a decade. 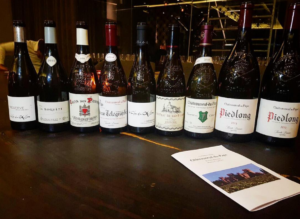 Finally came the showpiece of the evening, and the wine many were excited to try: The 2010 Réserve de Celestins from Domaine Henri Bonneau. Henri died in 2016, and this was the last wine he bottled before his death, preferring to age his wines in a mismatch of oddly sized and shaped old barrels until ready to drink. Known as a mercurial talent, making wines in an incredibly traditional (and now somewhat unique) style, his will be a hard act to follow.

The 2010 Réserve de Celestins was awarded 97-99 points by Robert Parker – a near perfect score for a man who had no interest in what the outside world thought of his wines, preferring to deal directly with a single distributor (who made vast profits out of Henri’s single mindedness) and preferring to drink Muscadet rather than his own wine.  As we only imported 24 bottles into South Africa this year, trying this wine was a once in a lifetime opportunity for most present and did not disappoint.  To date this is my favourite Châteauneuf, with highly concentrated fruit, beautiful ‘Garrigues’ aromas, some oxidative characters and a long, powerful, beautiful finish.  Henri will be missed, even by those who never knew him.

This tasting was followed by a dinner of equally epic proportions. We started off with Blackened Octopus and Chorizo, perfectly complemented by Le Clos de Caillou’s Reserve Côtes-du-Rhône 2015, followed by rare Impala steak paired with the Domaine La Roquete Piedlong Châteauneuf-du-Pape 2013 from Magnum. Cheese was served to mop up the last of the wine, and when the meal finally finished, we waddled out into the night happy and content – a great night all round!

The last bottle of Henri Bonneau ‘Reserve de Celestins’ 2010 was taken by the sommelier at Marble, and is available on request at the restaurant.

The wines available to purchase from this lineup are:

Tags:
Châteauneuf-du-Pape, Tasting
Newer Forgeries in the World of Fine Wine
Back to list
Older Winds of Change in Burgundy: how will this impact wine lovers?

The Sad Passing of Henri Bonneau

Great Domaines was very saddened to hear the news of the passing of legendary Châteauneuf-du-Pape producer Henri Bonneau....

END_OF_DOCUMENT_TOKEN_TO_BE_REPLACED

David Finlayson from Wine Goggle writes about his DRC experience

A member of the cape winemakers guild and influential South African winemaker David Finlayson, tells us about his experience with Domai...