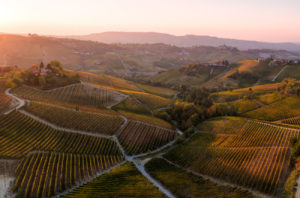 We remain in Piedmont and attention shifts to the grape that produces the ‘King of Wine’. Nebbiolo is a small, thin skinned red grape that generally produces wines that are high in acid and tannin. During the growing season, it is one of the first varietals to bud and the last to ripen, with harvest taking place in mid-to-late October. 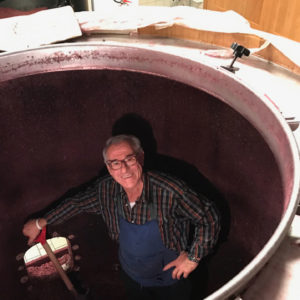 Our wine today is Luciano Sandrone’s “Valmaggiore” Nebbiolo D’Alba 2014. Sandrone is one of the most iconic and well-respected producers in the Barolo region. His story is quite remarkable. “Every year and every bottle tell the story of a dream come true: the young cellar-hand who became one of Barolo’s most emblematic figures”, wrote Italian food and wine magazine Gambero Rosso in 2009. Ever since he was a teenager, Luciano Sandrone wanted to be a winemaker. He began his career as a cellar-hand working in the historic Marchesi di Barolo estate, saving up money until he could afford to buy his first parcel of land in Cannubi Boschis in 1977. Cannubi is one of Italy’s most famous vineyards (its name first appearing on a wine label in 1752). The Cannubi hill is a long stretch of land extending north-east to south-west and running along the town of Barolo at 250-320 meters in altitude. Luciano’s maiden vintage, 1978, was made in his parents’ 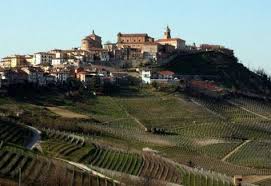 garage as quietly worked and revised his techniques. He was only able to work the land on weekends as he had a day job. Today, he has 22 hectares of vines planted on the steep hills of his estate. After taking the wine world by storm after a perfect score from Robert Parker in 1990, Sandrone has gradually built up his production to around 100,000 bottles a year – rather impressive for someone who started with only a few vines.

Years of refinement to his wine-making techniques has only further improved the quality of the final product. Sandrone’s style reveals his respect for the firm traditions of Barolo wines, but also an appreciation for the modern advances in wine-making. Every vintage up to 1999 was crafted at home. In 1998 he started building a winery, which now sits proudly at the foot of the Cannubi hills.